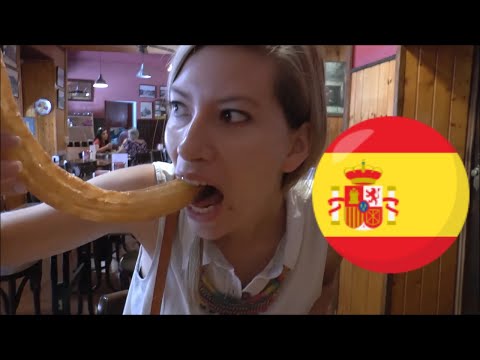 So it is three thirty PM in Madrid, which means it is lunch time. So we’re outside at a little patio right across from our hotel. And we’re going to be doing a battle of the soups. We plan on trying two different soups that are from the region of Córdoba, Andalusia in southern Spain. And they are called Gazpacho and Salmorejo. And there is some similarities and some differences between these two cold soups, so we’re going to be showing you what those are.

So our two soups have arrived. I’m having Gazpacho, Sam is having Salmorejo. And at first glance they do look quite similar. The same color because it is a tomato base but the topping is a little bit different. Now we’re going to be actually tasting them and telling you about the ingedients and what sets these two apart. Okay, so time for the first spoonful of Gazpacho. Oh ho ho, baby! Mmmm. That is so good. It is tangy because of the tomato. It is served cold so it is really refreshing. And this one has a lot more ingredients than Salmorejo. So I just put in some chopped bell peppers, green and red peppers. It has also got a bit of onions in there. And it was drizzled with olive oil on top. So a great combination on a hot summer day.

I’m just going to keep enjoying this over here. It is so good. So two more things I’ll mention about Gazpacho. If you don’t want like a full bowl of soup you can actually get it as a drink in a glass and that is cheaper because it is a smaller portion. And also Spanish Gazpacho is really different from Moroccan Gazpacho, which is what I was used to. The Moroccan recipe has chickpeas and beans so don’t be surprised if you come to Spain and there are no chickpeas in your Gazpacho. And Gazpacho also comes with a basket of bread on the side. So if you don’t want to drink it like a soup you can just dip some bread in there. And almost treat it like a dip. Great either way. And you are having Salmorejo. Tell us what that is like? And that is a little bit different than the Gazpacho. If you look down here you can see that it is a thicker tomato puree.

So basically it is thicker. And you’ll also notice that there is some egg here. So I’m going to have the first bite to see what it tastes like. You have some egg, ham and olive oil as your toppings. Yeah, it is almost a bit more like a cold stew than a soup. It is definitely thicker. I really like the taste. I like the olive oil drizzled on top too. It just.

It is a really awesome dish to have in the summer to cool down. And apparently there is a mystery ingredient here. What is it? Yeah, there is something cool that we discovered upon research. And that is that stale bread is in both of these. In both of these soups. So they soak it in water and then just mix it in with the Gazpacho and the Salmorejo. But you wouldn’t be able to tell at first glance. No, you wouldn’t. And price point for this meal.

So as an appetizer here in Madrid you can pick one up for about five Euros. Or if you want the smaller portion you can get it in a glass for about two to three Euros. Two fifty usually. So it is dinner time in Madrid and today we are here at a local restaurant where we’re going to be trying two different dishes. We are planning to eat Paella and something called Fideuà. They are two dishes from the region of Valencia. And there are some similarities and some differences between the two so we’ll be showing you those as soon as the plates arrive. The food has arrived. Yes, some I’m going introduce mine first. I am having the Fideua, which is kind of like a noodle Paella, and it is made with Vermicelli noodles which are super thin and mine has mussels, prawns and squid as well as artichoke hearts so let’s take a big bite of this.

It’s hot. That is really nice. Wow. You can really taste the seafood. It is super flavorful. And I also like that the noodles are a little bit overcooked. Like they are nice and soggy, which is how I like them. So I’m quite happy with my meal so far. Okay, so your mixed Paella has arrived. Tell us about it. Yeah, the Paella is finally here. So the mixed Paella has a whole bunch of different things. Let’s take a look down at it. So you can see that there is chicken, we’ve got shrimp, we’ve got other kinds of seafood, we’ve got peas and it has got kind of a looks like to be a yellow type of curry sauce.

Nice. So let’s take the first bite here. This is my favorite Spanish food. The thing I like about it so much is that you have all of these different ingredients and it just has such a flavorful sauce on top of the rice. It is just so good. So if Sam were to try the traditional Paella from Valencia that one would actually have chicken and rabbit because that is what the original recipe calls for. But we’re not really used to eating rabbit so that is why we went with the mixed one that has chicken, some seafood and chorizo. So quite a few restaurants in Madrid, and all throughout Spain have Paella on the menu, but the ones that really specialize in it have a special kind of pan. Some come take a look here.

And you can see that it is made right in it and brought to your table. And they have the wooden guards on the end that basically probably protect you from getting burnt. Exactly. Well, we certainly polished that off. So now let’s talk about the price. Yeah, that was nice and filling. So in terms of price it can vary widely. In more expensive kind of like gourmet restaurants that really specialize in it we’ve seen it go up to thirty or thirty five Euros. We’ve never actually ate somewhere like that.

The place we went to was eleven Euros. And we thought it was a really good value. We’re both really full now. And I’ve also seen it as an appetizer in some smaller types of restaurants and you can expect maybe to pay seven or eight Euros for that. So it is breakfast time here in Madrid. We’ve just rolled out of bed at 10 am. Which is a bit unusual. But we’re here at a local cafe and we’re going to have a traditional Spanish breakfast. So we have ordered a hot chocolate with Churros and Porras. So we’re going to show you what those are like in just a few minutes. So this is something that is completely new for me. This is called Porras. And it is basically like a giant sized Churro. Like I’ve never seen anything like this before. I know, look at that, it’s like. It’s wider than your shoulders.

Hahaha! Alright, so we’re going to dip it in the hot chocolate because that is how things are done here. Oh ho ho baby. Mmmmm. That is delicious. It is nice and greasy. And sweet. It is probably not the healthiest way to start the day but ‘hey’ when in Spain. Hey we’re doing it the Spanish way. That is delicious. I’m loving it. What are you having? I’m actually having the proper Churros. This is a deep-fried dough. And what I’ve found interesting is that when I’ve had this in Canada it is more of a dessert but over here in Spain it is a breakfast.

And it is very popular breakfast item. So let’s dip that right in the chocolate. Show us how it is done. Break off a piece here. And that hot chocolate is as thick as it gets. It must have some kind of special ingredients that make it especially thick and rich. It’s like mud. It’s like chocolate sludge. Wow! Let me just say I could get very used to having this as my normal breakfast. It’s that good. So what I find unique about the Spanish Churros is the shape. When we had these in South America they were usually like long little strips. And also there is no filing in these. I still haven’t come across any Spanish Churros that have fillings. Whereas in South America they were stuffed with chocolate, vanilla pudding, dulce de leche. So that is another difference. Now let’s dip this. Oh la la. This is so good. Mmmm. It is like a wishbone. Hahahaha. So show us what you do with the leftover hot chocolate. You know what.

This is a breakfast that is like a gift that keeps on giving. What is left over is a hot chocolate and it is amazing. It is so thick. Like we were talking earlier. It is almost like a sludge but it is really rich and creamy. I think there is extra condensed milk or something. Wonderful. So this is a super affordable breakfast. I’ve got the menu right next to me. And basically it is two Euros and fifty cents and you get your peach juice, your hot chocolate and either three Churros or three Porras.

And yeah, I’m stuffed after all that food. Surprisingly. So it is time for another breakfast here in Madrid. Today we are having the madrileño, which is the local breakfast that everybody likes in this city. And if you look down here you’ll be able to see this is Tortilla. Which is a potato and egg type of dish. So it is kind of like a potato and egg omelette. And it is delicious. It comes with a side of bread. And I can’t wait to dig in. Oh la la. Look at that. It’s so good. It is so good. This is your favorite breakfast. It really is. I’ve been eating it daily. And on my birthday I had it for breakfast, lunch and dinner.

That is how much I like it. Okay, so apparently how this dish is made is that the potatoes are first cooked in olive oil and then the egg is added and then it is just flipped over several times until it is done. It really is just like an omelette in a lot of ways. So the Spanish Tortilla has nothing to do with the Mexican Tortilla. The Mexican one is just like one of those big round wraps that you use for Quesadillas and Burritos. But the Spanish Tortilla is completely different even though it shares the same name, so keep that in mind. And also while we’re talking about the Spanish Tortilla it can be prepared a few different ways. Like the most simple one of them all is potato and egg but you can also start adding onions, peppers, ham, so you can get a little bit fancier.

Okay, so what is the price for this delicious breakfast. This tasty breakfast comes in at around four Euros and usually it comes with a juice. They didn’t have any today but it did come with a coffee and bread. And it is a filling breakfast. It is a great way to start our day. And it is definitely one of the things we have the most while we’re here in Madrid.